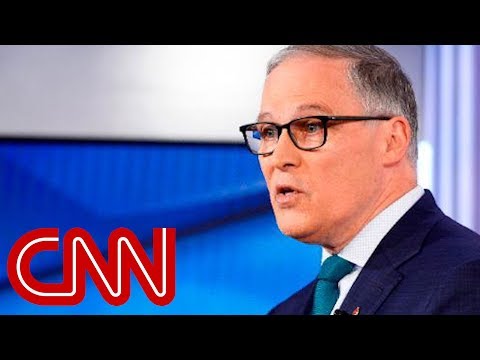 Are ya crazy or just plain stupid?

Forest Inslee or is it Jay Gump?

We thought that AOC took the Pulitzer prize for being the stupidest US representative in history . Not to be outdone, Jay Inslee tells us ” hold my beer!”

Jay Inslee is the “Village Idiot” of the 2020 Democratic Socialist presidential candidates.

Either Jay Inslee likes to shoot from a hip of enviro-fascist ignorance or he is putting us on. But then again, his liberal left idiot supporters in Seattle will believe anything they are told. It could be simply mass ignorance. It could be the latent outcomes related to liberal indoctrination and conditioning in the school system. It could be a combination of both. At this moment in time, one has to be extremely limited in one’s capacity for rational thought to believe Jay Inslee or AOC or anything they have to say.

There are two possibilities. Jay Inslee is either a low IQ moron spewing gibberish or he is going to extremes to compete with your standardized Democratic Socialist stupidity.

Jay Inslee wants to get rid of fossil fuel powered transportation by 2030? WTF?

World Lithium mining and battery production can only support 500,000 cars a year.

There are 280 million cars in the USA. Hence, it would take 560 years just to produce the lithium required. That is if the mines do not run out of lithium deposits. Oh and 560 years of lithium mining would create huge holes in the earth and environmental catastrophes. Oh and the number of solar panels to charge up these batteries would be incomprehensible.

The economy would simply collapse. Inslee is suggesting that we go back to bicycles and horses? How will the farmers plow the fields? Would they have to use fart cutting Oxen? How would Jay Inslee pay his enormous state budgets? Maybe we all should be Amish, inbreed, and make wood things for minimum wage.

Is he crazy or something.

Really, is Jay Inslee showing early signs of dementia? His irrational thought processes are at the level of a 6 year old’s that just woke up from a nap.