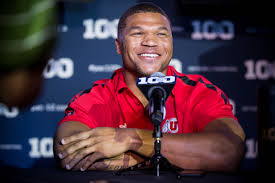 There were a few good highlights during the Bronco/49ers preseason game. The deep left bomb to Sanders that was negated by a penalty comes to mind. Then there were the reverses that netted some gains.

Devante Booker acquitted himself well and has established himself as a consistent “Sammy Winder” style asset. David Williams was showing that his size and speed are a better alternative than the “minnimees” that Elwood recruited of late. With the loss of Theo Riddick right off the bat, our eyes had turned to the second time Bronco for possibilities. All was going well for Williams until he tipped a catch that turned into an interception.

There were some good aspects of play calling, however, we saw some Kubiakesque calls up the middle as well. It was clear that George Aston is no Janovich.

We expected way more from Freeman and Lindsay. Instead of picking up Theo Riddick, Elwood should have concentrated on Freeman, Lindsay, Booker and Williams and their hands in the back field.

lastly, Booker is a 3 or 4 yard per carry back with good hands. He is no frills but he gets the job done. Elwood confused all the issues when he picked up Riddick and all the little minnimees.

David Williams can haul ass when he has a lane. he then has the size to punish defenders for added yardage. He is way better that Juan Thompson. A fella you kept around even at 1 yard per carry. Do not be stupid and release Booker. He does everything you ask every single time.

Bolles needs a talking to about penalties.

Flacco needs to quit being so hyper vigilant about the way he looks on camera and get down and dirty. This is not a beauty contest and we dont care about how he looks in leotards. Get over yourself and get it on…Oh and be happy….Show some humor and some smiles….We need that after the last 3 seasons.