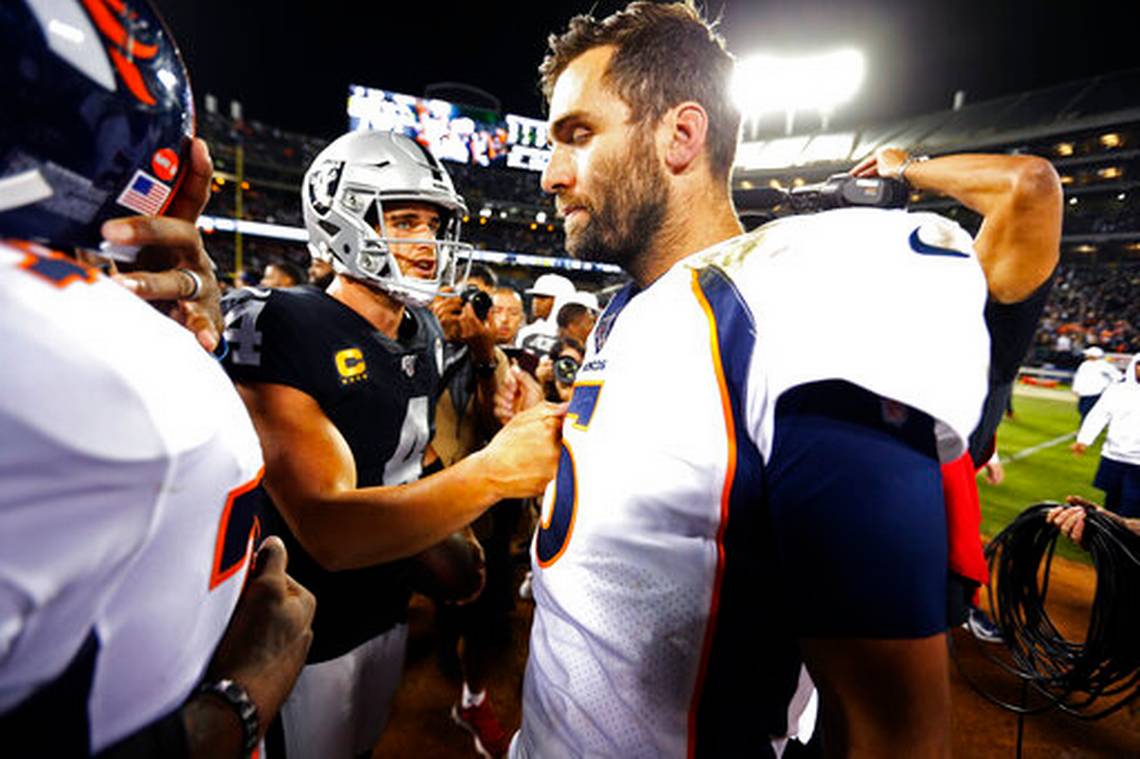 Joe Flacco is a really good quarterback with a massive arm. He is a complete and glaring upgrade from Case Keenum. He is not at the end of his career. Joe is at the beginning of several bad ass years in Denver. His tank is topped off.

The Broncos did not win against the Raiders. So what! There will be plenty of opportunity for Derick Carr to fall on his face, and for Gruden to get his ass kicked. In reality, the Broncos felt sorry for the Raiders given it was the last game in the Black hole.

What we did get to see is Flacco’s talents and his quickly adjusting to a different team, different coaches, and different everything. The dude is the real deal. He reads the field 10 times better than previous Denver quarterbacks. When he finds a receiver, the ball is delivered like a missile on target no if ands or Jake buts.

It is not Joe’s fault that the D could not stop the run and Yiadom go burned a dozen times. We all remember when Champ Bailey got burned only twice in one game, and we made a big deal out of it. Yiadom got roasted so many times that he was put on a rotating skewer. Meanwhile, Bradley Roby is killing it.

It is not Joe’s fault that 17 dropped a ball on the numbers in the end zone. If the ball was caught, the game goes into overtime.

Looks like Joe Flacco knows how to exploit Sutton. There will be hell to pay.

The only negative take away from the loss to the Raiders was how the Bronco D-line has regressed over last year. We had great expectations that Fangio’s D line prowess would manifest itself into the sack machine from hell. As it was, Fangio’s D was not even as good as Saint Joseph’s. Whats up with that?

Keep the faith boys. You have found your footing. Now get it on!

Thanks for coming to Denver and making Bronco football fun to watch again. Elwood has his man!!!!!

All is well in Broncoville.

Oh, and just wait till we get those fat Raider O-line phuckers at Mile high later in the season. We will go full ” Mecklenberg” on their asses.