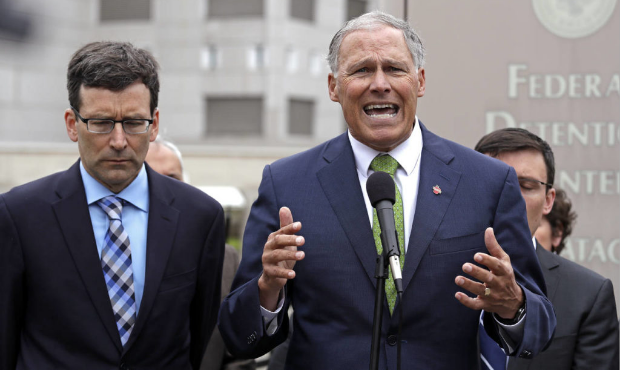 Jay Inslee cant even qualify for a Democratic Socialist presidential debate dominated by a geriatric that does not know what day it is, and big government identity politics candidates that think everything grows on trees. Go figure!!!

For years and years, Jay Inslee could snap his fingers and the liberal establishment would roll over on their backs for the tax and spend Democratic Socialist moron. The tall and handsome side mouth talking bullshitter could manipulate those that are soft in the head. One could say that he had a high political natural selection quotient even though he is full of shit. Moreover, his perception of himself, his self concept, and his self confidence are bullet proof. That was then, this is now.

The political climate for Jay inslee has changed!

Several political truths are converging and coalescing on Jay Inslee’s reality. First off, Washingtonians are simply fed up with Jay Inslee. They are sick of the theatrics. We are sick of of the narcissism and me , me , me. We are sick of his lust for bigger and bigger state budgets and taxation. Above all, we really hate how Jay Inslee does not represents the will of the people he is supposed to serve.

In the final analysis, Jay Inslee offers big government, big taxation, big freebies, open borders, sanctuary cities, enviro-fascism, and the government control of everything. Under his leadership, the liberals in Seattle are running big business out of town. Under his leadership, liberals are back stabbing Boeing, and attempting to push the job creating Navy out of Whidbey Island. Everything that Jay Inslee does is hostile to the tax paying citizens of Washington state. Jay Inslee is not a job creator. He is a job eliminator.

Jay Inslee is again polling at zero. Only Trudy and little Bobby ” Harry Potter” Ferguson will support him. The major polls do not even list him by name. It is time for Jay Inslee to abandon his run for the presidency. He is fighting way above his weight class, and he got dismembered. It is time he turned his attention to the Republican challengers that are in the Washington state political cage. We are frothing at the mouth and have been training for several years. We are looking for the big win and we are coming after Inslee and his boyfriend Little Bobbie “Harry potter” Ferguson. Of course we wont be running an emaciated looking ventriloquist doll dude or an extroverted lunatic this time.

Jay Inslee got “Conor McGregored’ on the national stage. It is time for him to come back to his weight class and get his ass kicked here at home.

Here we have Jay Inslee hanging out with Jeffrey Epstein’s friend Bill Clinton. Seems Mr. Bill went to Epstein’s underage sex Island on the “Lolita express.” Several times in fact. Jay Inslee likes to hang out with predatory sex offenders that are pedophiles and rapists.